In memory of special humans and canines who touched our lives.

Maria Kovacs-Mazariegos sent a letter dated March 4, 2022 with a check for $5000 as a memorial donation in honor of her uncle. Dr. Dezsoe T. Kovacs, M.D. Her uncle lived and worked in central Texas for over 50 years.  His lifelong love for animals inspired him to donate his time and medical expertise to local rescues.  Maria has two German Shepherds pictured below. She says that the compassionate, tireless work of our organization resonates deeply with her and her husband. She says that our accomplishments are greatly appreciated, and her uncle would be happy to see the continued progress our organization will make in the future.

Beverly Gainer - Founder and past President - passed on December 7, 2021

We announce the passing of Beverly Gainer, Founder and Immediate Past President of German Shepherd Rescue of Central Texas.  Known simply as "Bev" she was Foster Mom to countless dogs as well as a mother, friend, and dog rescuer.  She touched the lives of many humans and dogs over the years.  Our hearts are heavy, and we express our condolences to her friends and family.  Her memorial service was Saturday December 11th at Cooke Walden/Forest Oaks Funeral Home. In lieu of flowers or plants, Bev would have wanted donations to go to the dogs so donations can be made in her memory to our Rescue.  ​ 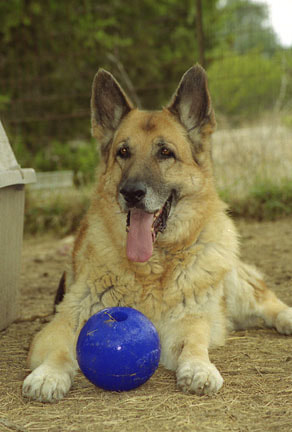 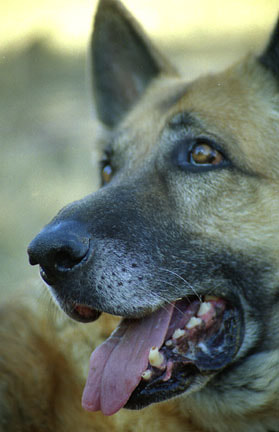 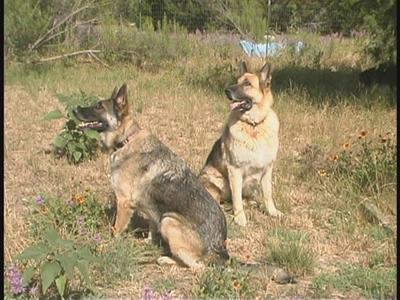 So who is Dylan and why is he important to us?  Dylan is the handsome boy we use as a profile photo. As many of you know, our Founder, Bev, passed away late last year. We miss her beyond words. Dylan was her heart dog. Dylan passed away at the age of 13. He and Bev are cuddled up in heaven right now.  We want Dylan to be the cover model for this year’s shirt design because he was Bev’s soul mate. She called him the “Co-founder” of German Shepherd Rescue of Central TX and he is listed as such on our website.
Of course, as a dog rescuer, Bev had many paws cross her heart. There were many that came and went, before and after, but never another like him. Dylan was so in tune with Bev that he knew when she was leery of someone without her saying a word.

Bev did many activities with Dylan. She joined the German Shepherd Dog Club of Austin and dipped her toes in IGP, formerly known as Schutzhund, German for "protection dog". They also trained in Search And Rescue but because of his intimidating presence, the joke among the group was that if ever they were lost, they’d rather die than have Dylan sent out for them! One time a guy, as a joke, pretended to “attack” Bev to see what Dylan would do (never do that by the way, to any dog!!!). Bev warned him several times that it was a bad idea. When he poked at Bev and Dylan went after him, Bev only said, “I told you so”. She called Dylan off and walked away…
​
Dylan lived to be 13 yrs old and to the day he died, he lived for Bev. He was her constant companion, her protector and best friend. A true representation of this loyal & loving breed that we all adore.

Our dear friend and fellow volunteer, Jerry Smith, passed away on Wednesday, February 5th. Jerry lived a full life of travel, adventure and excitement but what set him apart was his love for family, friends and animals. Jerry was a man who could be counted on, no matter what, and was fiercely loyal. He had a great sense of humor too! Jerry’s calming presence and kind heart made even the most challenging rescue dog trust him immediately. He had the same effect on people and everyone loved him. As an airline captain, his lifelong passion was flying but he also loved motorcycles, good food and everything Texas! Jerry, we will always miss you but you live on in our hearts and we will continue to honor you through the work you so loved, helping dogs in need. 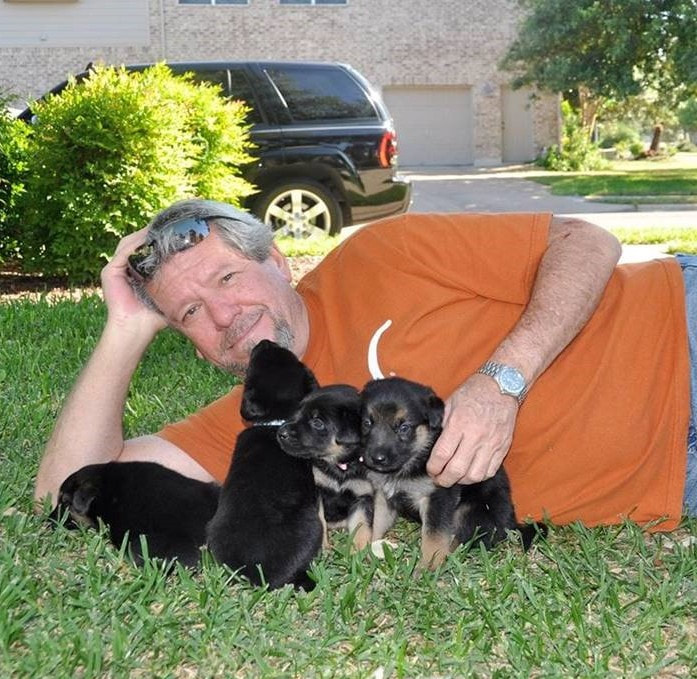 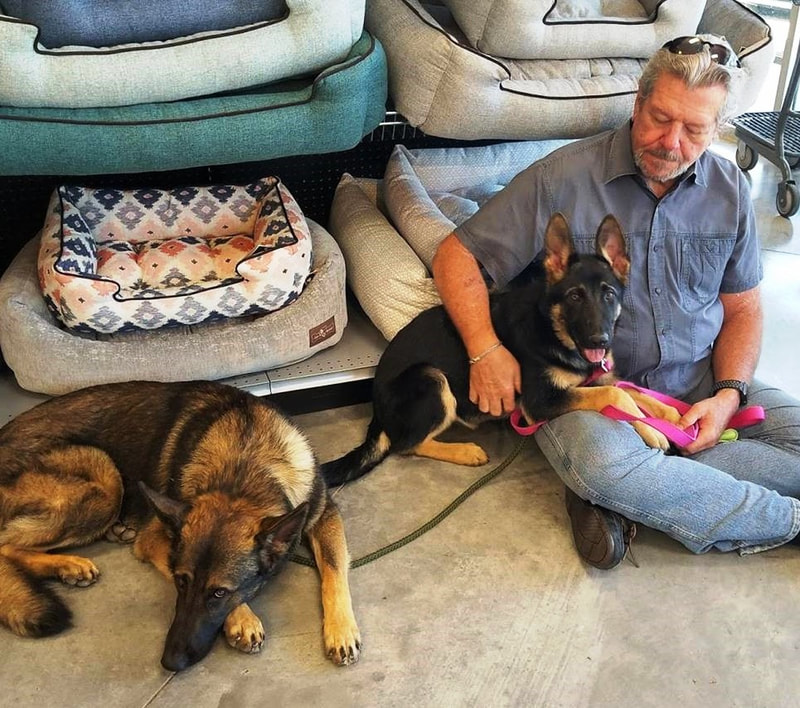 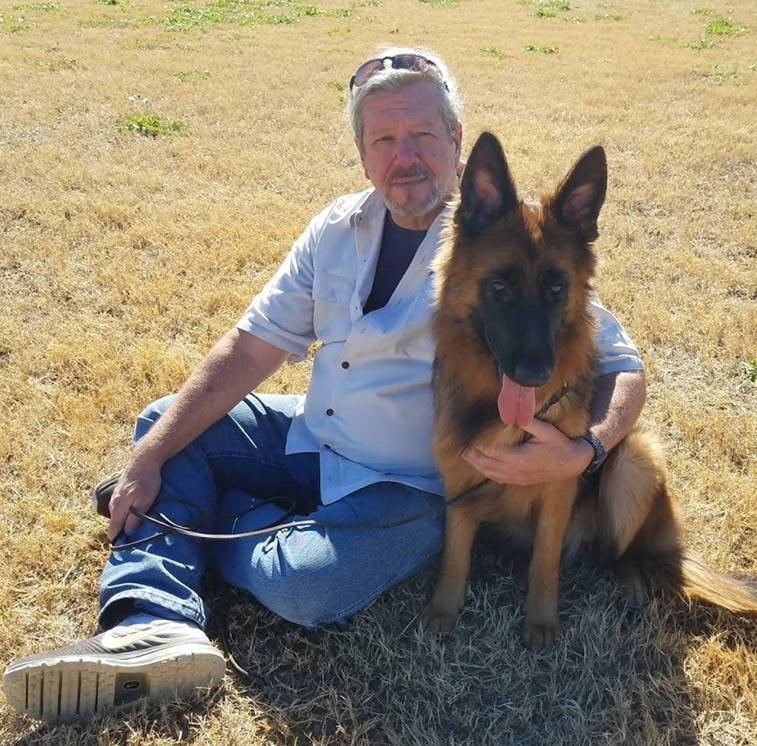 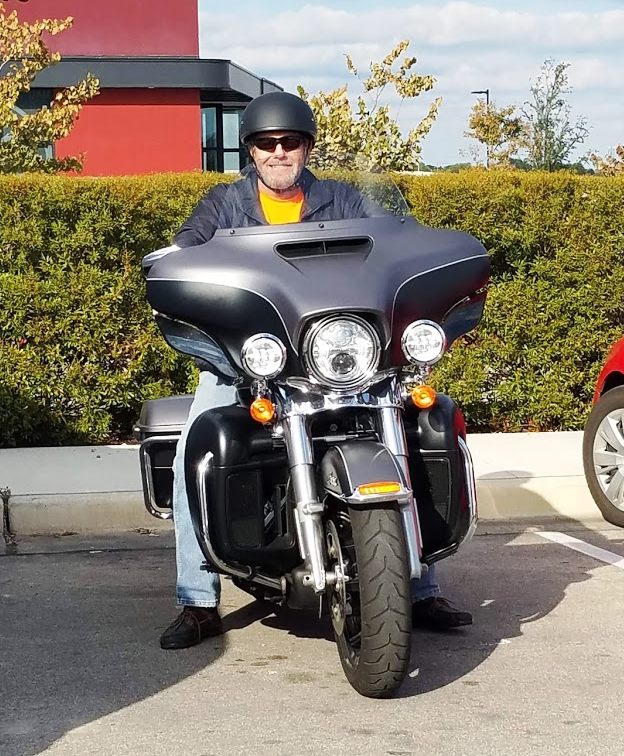 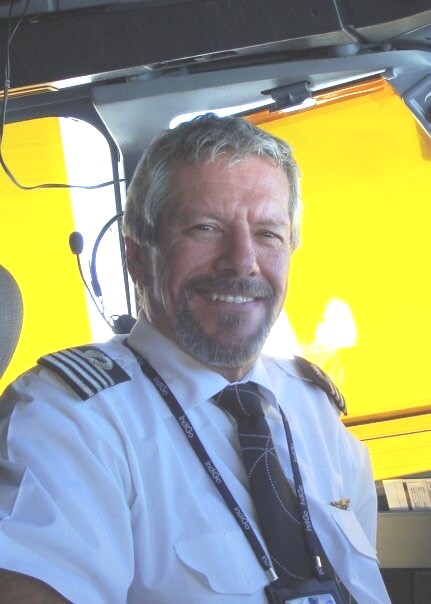 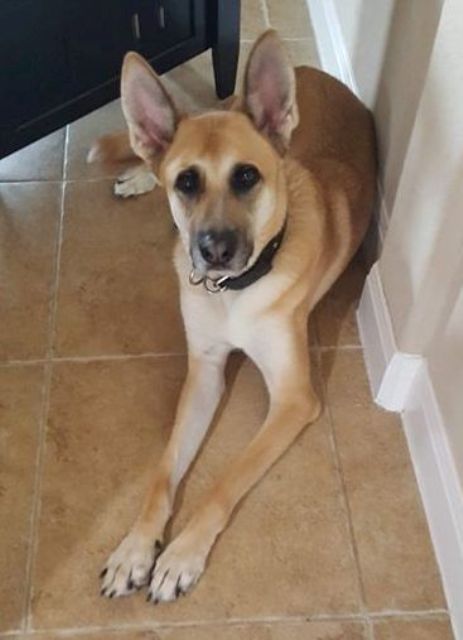 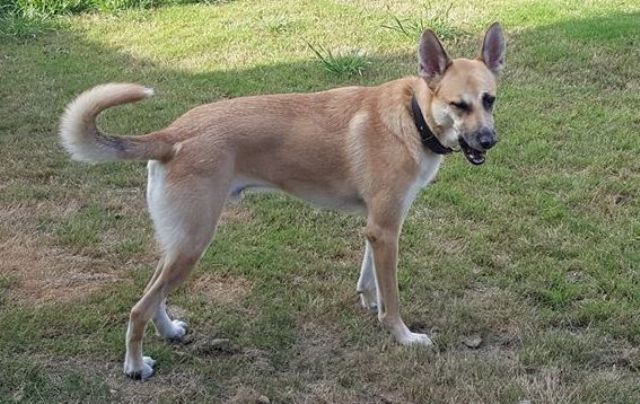 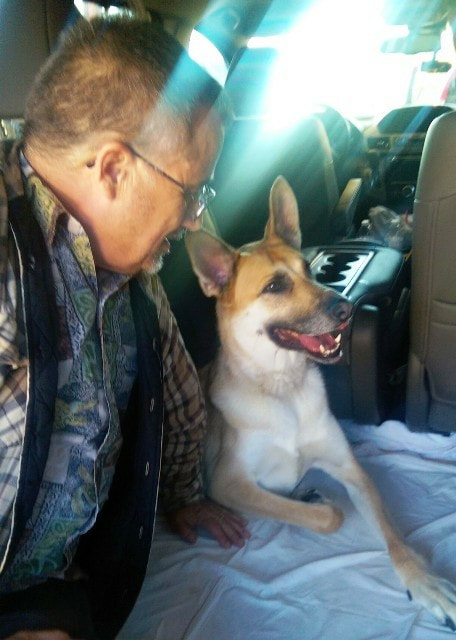 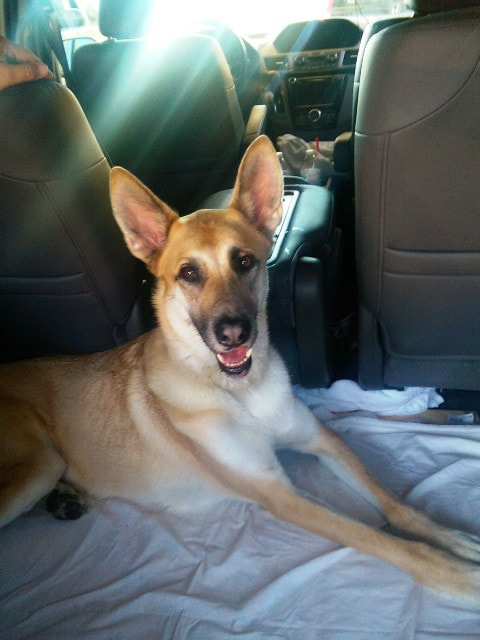 Levi is a special German Shepherd mix that had been adopted three years previously as a puppy from our organization. However, he got out of the yard on the day the family was moving away and for some unknown reason, jumped off a concrete overpass at least 20 feet high. He landed hard on the concrete and broke all four legs. One hind leg was completely crushed. Levi could not walk at all. He was carried away from the site by very kind Bexar County Animal Control people and was kept comfortably in their shelter about a week on pain medication. We decided to take him out of the shelter and drive him from San Antonio to Dripping Springs. The guy never whimpered one time even though I am sure he was in pain. He stayed quietly in the back of the van as we drove him to two different vet hospitals for evaluation. He licked our faces and I think he realized we were trying to help him. After getting the news that we would have to put him down, we gave him a last meal of Arby's roast beef sandwich and had him quickly and humanely euthanized in the back of our van.  We will miss the brave and dignified spirit of Levi very much.

Michele Kronberg - ​The Heart of GSDRescueCtx 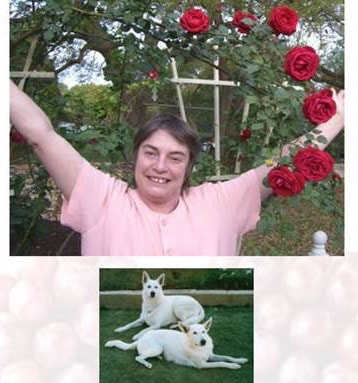 Michele Kronberg was the heart of German Shepherd Rescue of Central Texas, serving on the board as our Vice President. She was one of our biggest driving forces behind rescuing and finding homes for abused and abandoned dogs. Michele had a lifelong love of  white German Shepherds, and always had at least one with her at all times. Michele supported rescue through generous donations, ensuring all dogs received needed medical treatment and found wonderful homes. Michele could be seen at all rescue events, supporting the group and making friends with her bright cheer and love of life.  You could count on Michele, day or night, to be there for anything you needed.

Michele also owned Austin Flag and Flagpole, and provided beautiful banners for our group to use at local events and in promoting our group.  The banner you see on our home page was provided by her!  Michele is deeply missed by all who knew her. There is no one like Michele. Even though our group continues in her Honor, there is a big hole that will never be filled.